What people have said

In an article that appeared in the 2001 edition of the Australian publication ‘The Flyfishers Annual’, a jazz musician suffering from arthritis in his casting hand offers an account of his experience of the Maniform grip, fitted to a new Sage rod. Read about Don Burrows’ experience

The following letter appeared in the December 2006 edition of the UK’s ‘Fly Fishing and Fly Tying’ magazine. The author Dr. Vernon Wood is a retired GP who specialized in sports injuries, including Repetitive Strain Injury. Dr. Wood is a keen fly fisher, and is now a qualified fly casting instructor.

“Further to my comments about the importance of rod handle design in relation to tennis elbow (“All in the Wrist”, Sept issue) and David Stocker’s letter (“Pistol Grip Rods”, Oct issue), I have had the opportunity to look at the Maniform rod handle more closely.

Tennis elbow is caused primarily by excessive or strenuous gripping and my original reservations about this handle centered on the fact that it slopes away like the reverse half wells, which necessitates a tighter grip in order to prevent the hand slipping up the rod. However, although lacking the end thumb stop that the full wells provides, the Maniform does have a prominent bulge on top of the handle. I found that the thumb bends naturally over this, which has the effect of stabilising the hand and resisting any tendency for it to slip. In addition, the “pistol grip” is deep and very comfortable so that overall the Maniform is probably even better than the full wells in terms of discouraging too tight a grip, although this would be difficult, if not impossible, to prove.

Although other factors will almost certainly be involved when it comes to avoiding a potentially harmful tight grip, nevertheless the choice of a suitable rod handle is important and the Maniform would certainly seem worth considering, particularly if tennis elbow is a problem. Sufferers from other hand conditions such as arthritis, deformity or scarring should also derive considerable benefit from such an ergonomically designed handle. ” Dr.Vernon Wood

When the Maniform was launched broadband and internet access was far from as universal as it is today. Here are some comments about the handle found among postings on angling forums in the intervening years:

“I’d agree with Frank on this. But I do know some people who have arthritis and they love that grip. I guess it comes down to personal preference.”

“The maniform grip with several custom variations are popular with the tarpon fishermen who look for the 200 pounders around the Homosassa flats. These are generally on 12 wgt. and larger rods. I have seen some with extended fighting butts. They look a little weird but add considerable comfort when pumping up those massive critters. Casting is not the issue here, it has more to do with hanging on for several hours of battle. In fact Billy Pate used one on a 198 pounder which set the world record on a fly until it was topped last year by a 202 pounder. My arsenal does not include any but I have seriously considered making some.” Capt. Harold Crystal River, FL

“I have made several salt water fly rods for a friend who had the bad habit of casting with his index finger instead of his thumb on top. This grip solved that problem & cut down on his dropping the rod too low on his back cast. He loves them.”

“I built a 10wt with a maniform grip and it’s gone in and out of favor, but I think that is due as much to the blank as to the grip. Anyway, I’ve been fishing with it a lot lately and feel that the grip does improve my casting form and definitely puts less strain on my wrist. On the downside it seems a little big for my hand, which can be problematic when I’m fighting a large fish. Still, I’m considering using a maniform grip on my next 8 or 9 wt.”

“Thanks for the nice words. It feels odd when just holding the rod – but when casting everything falls into place – its very comfortable and helps me keep my backcast high (in some strange way 🙂 and takes some strain away from my wrist.”

“I have built and fished alot of rods with a maniform cork and really like the feel of it. It is an erganomic handle. That helps keep your casting true. It also helps to create less effort to a cast. It does not look traditional.” James

“i am building a couple of rouge Fly rods a 2pc 9 1/2′ 11-12wt … and a 3pc about 8wt. that we just cut and fit the sections to about 9′ (i like designing my own rods)…Putting on maniform grips..(if you havent seen them) they are a MUST SEE.. i hope to have ready for the trip to the OBanks in may”

“Hi Ian D Handle looks a bit odd,,,,but if it works ” I WANT ONE ”
.Im hoping to get some new blanks soon and if yours is ok ill get on to Lathkill for one. Did you take rings off or split the corks to get it in position ?” cheers Frank 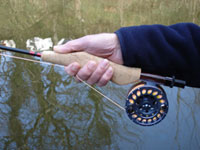